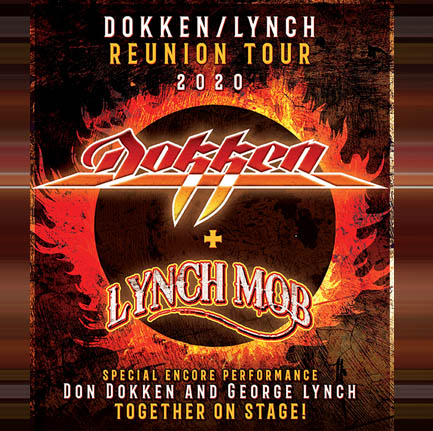 Tickets are $5 more day of show. Ticket price includes a $3 facility charge, does not include sales tax and service fees.

Dokken is an American glam metal band formed in Los Angeles in 1978. It split up in 1989 and reformed four years later. The band had several hit singles which charted on the Billboard Hot 100, such as “Alone Again”, “In My Dreams”, and “Burning Like a Flame”, and have sold more than 10 million albums worldwide. At a time when the charts were ruled by pop-metal acts, Dokken were a major attraction throughout the 1980s. With vocalist ‘s captivating stage presence and guitarist ‘s high-energy style, the band combined rockers such as “Kiss of Death” and power ballads such as “Alone Again” in order to create a number of best-selling albums.

George Lynch is one of the most recognizable names in the world of heavy guitar. With a career spanning more than forty years, George has recorded more than thirty albums, toured the globe many times & is one of the most recognizable endorsees of the world’s finest guitars and equipment. He is also the creator of the Mr. Scary guitars brand of incredible hand built guitars.