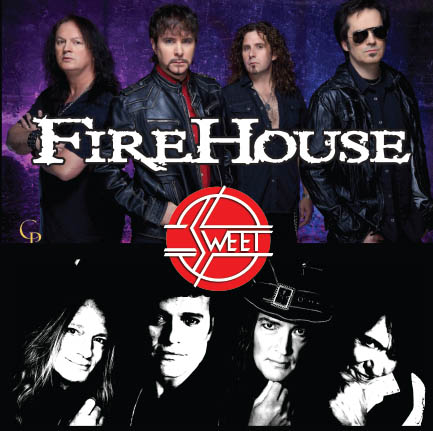 Due to technical difficulties we have post-poned the on-sale to Tuesday, November 16th at 11am.

FireHouse has been rockin’ for 30 years. Their music has taken them all over the world and produced Gold, Platinum, and Multi-Platinum record sales. In 1990, their debut self-titled album featured singles “Shake & Tumble”, “Don’t Treat Me Bad” and “Love of a Lifetime”, which both became top ten hits at radio. This string of hits vaulted their first album to double-platinum status in the U.S. At the 1991 American Music Awards, FireHouse was awarded the Best New Hard Rock/Metal Band, chosen over Nirvana and Alice in Chains. The band’s second album, HOLD YOUR FIRE, (1992) produced hits “Reach For The Sky”, “Sleeping with You” and another top ten hit, “When I Look Into Your Eyes”. This album earned the band platinum sales in the USA and over a million more worldwide. Their third album on Epic Records, simply titled 3 produced another Top 40 Hit with “I Live My Life for You”.

The late great Steve Priest came ou t of retirement in 2007. Priest along with drummer Richie Onori, and keyboardist, vocalist Stevie Stewart assembled a group of top caliber national act musicians which Priest could proudly hail to be on the same equal footing and adeptness as the original lineup. For well over a decade his group entertained millions of music fans across the globe deliver ing high quality performances every single night. His handpicked band with an unparalleled chemistry continues to forge ahead with the same vigor, intensity & enthusiasm as always delivering the brand onward into the 21st century, thus keeping Steve Priest’s vision and “Sweet’s” legacy fully intact!

This show is 21 years and older. Tickets are $5 more day of show. Ticket price includes a $3 facility charge, does not include sales tax and service fees.