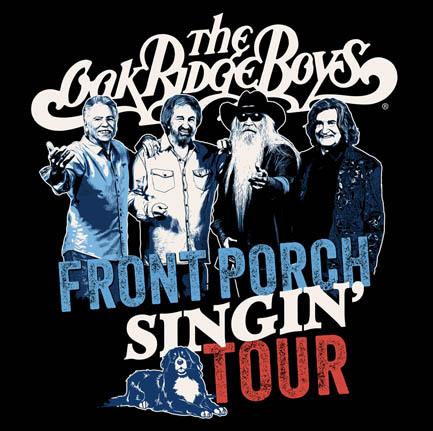 *THIS SHOW IS 21+ – NO EXCEPTIONS. EACH guest must present a valid ID for admittance.

Tickets are $5 more day of show. Ticket price includes a $4 facility charge, does not include sales tax and service fees.

One of the longest-running groups in country music, The Oak Ridge Boys started life as a gospel quartet before gradually modernizing their style and moving into secular country-pop. Their existence dates all the way back to World War II, circa 1942-1943, when a Knoxville, Tennessee group began performing gospel songs in nearby Oak Ridge, the home of an atomic bomb research facility. Their sound is one of the most distinctive and recognizable sounds in the music industry. The four-part harmonies and upbeat tempo of The Oak Ridge Boys have spawned dozens of Country hits and a number one pop smash, earning them Grammy, Dove, CMA, and ACM awards and garnered a host of other industry and fan accolades. Every time they step before an audience, the Oaks bring four decades of charted singles, and 50 years of tradition, to a stage show widely acknowledged as among the most exciting anywhere. And each remains as enthusiastic about the process as they have ever been.

Their string of hits includes the Country-Pop chart-topper “Elvira,” as well as “Bobbie Sue,” “Dream On,” “Thank God For Kids,” “American Made,” “I Guess It Never Hurts To Hurt Sometimes,” “Fancy Free,” “Gonna Take A Lot Of River,” and many others. In 2009, they covered a White Stripes song, receiving praises from Rock reviewers. In 2011, they rerecorded a thirtieth anniversary version of Elvira for a Cracker Barrel Old Country Store project. The group has scored 12 gold, three platinum, and one double platinum album—plus one double platinum single—and had more than a dozen national Number One singles and over 30 Top Ten hits.