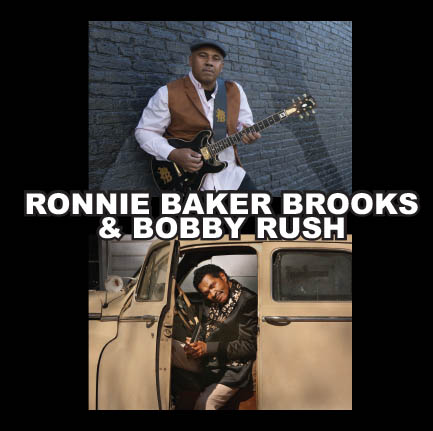 Tickets are $5 more day of show. Ticket price includes a $4 facility charge, does not include sales tax and service fees.

Ronnie Baker Brooks is an American Chicago blues and soul blues guitarist, singer and songwriter. He was a respected club performer in Chicago, even before recording three solo albums for Watchdog Records. The son of fellow Chicago blues musician Lonnie Brooks, he is the brother of another blues guitarist, Wayne Baker Brooks. All Music journalist, Andy Whitman, described Brooks as “… a better than average soul singer, a fine blues interpreter, and a monster guitarist with an ample supply of technique and passion.

BOBBY RUSH – 2x GRAMMY winning legend, Blues Hall of Famer, six-time Grammy nominee, and 13-time Blues Music Award winner, with cameo in the Netflix original Dolemite Is My Name starring Eddie Murphy, and autobiography on its way. Bobby Rush has been making records for nearly 70 years and has more than 400 recordings, 75 career releases, and now 27 studio albums to his name. He’s finally telling his story in his autobiography I Ain’t Studdin’ Ya: My American Blues Story currently available for pre-order and due out June 22 via Hachette Books who have published Keith Richards, Buddy Guy, and Tina Fey to name a few.