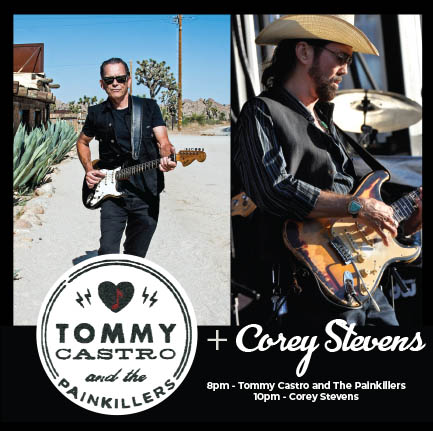 Tickets on-sale Friday, November 4 at 11am

Tickets are $5 more day of show. Ticket price includes a $3 facility charge, does not include sales tax and service fees.

“The hardest thing to do,” says internationally beloved soul-blues rocker Tommy Castro, “is be yourself, take some chances and bring your fans along with you.” Throughout his long, constantly evolving career, guitarist, singer and songwriter Tommy Castro has always remained true to himself while exploring, growing and creating new music, and he has taken his thousands of devoted fans right along with him. Since his solo debut in 1994, he’s made 16 albums—the last seven for Alligator—each its own unique chapter in the book of Tommy Castro. Ranging from horn-fueled R&B to piping hot blues to fiery, stripped-down rock ‘n’ roll, each release is solidly built upon Castro’s unshakable musical foundation—a dynamic mix of 1960s-influenced guitar-fueled blues, testifying Memphis-soaked blue-eyed soul and Latin-tinged East San Jose funk, all driven by Castro’s grab-you-by-the-collar vocals and passionate guitar work. Blues Revue declared, “Tommy Castro can do no wrong.”
“Sizzling, slow-burning, gritty blues and rock…shimmering, swampy, downright funky vibes drenched with Castro’s stinging, pure and crisp lead runs and fluid, jet-fueled solos.” –Living Blues
Stevens began playing guitar at age 11 and moved to Los Angeles after graduating from Southern Illinois University at Carbondale, to pursue a career in the music business. Stevens worked as a school teacher for the Los Angeles Unified School District for ten years before signing a recording contract with the independent label, Eureka Records. He released his debut album in 1995, garnering comparisons to Stevie Ray Vaughan and Eric Clapton, and scored a rock radio hit with the single, “Blue Drops of Rain.” “One More Time” from his 1997 follow up, Road To Zen, was his highest charting single. It reached the top ten in Radio & Records and number 22 on the Billboard Mainstream Rock chart.
SET TIMES:
8pm – Tommy Castro & The Painkillers
10pm – Corey Stevens